The Evolution of Online Marketplace Technology

We are used to having modern devices nearby, doing online shopping and using other opportunities that the Internet can offer. Can you imagine that from the invention of the Internet to our days only about 50 years have passed? For sure, there were some significant events that led to this result. They were related to introducing long-distance communication technology in the 30s - 80s.

Business and technology were developing side-by-side and improvement in one of these spheres pushed forward the second one. Long before online marketplace technology was taken to masses, the great minds have been developing technology step-by-step. Let’s turn into history and look through this unbelievable way from telegraph to the global Internet and separation of such advanced technology as eCommerce.

Online shopping, eCommerce, social sites, all these already familiar and common technologies have been developed relatively recently. These possibilities are available due to the Internet. And before the Internet has become a massive system there were 3 important steps:

In some countries people used smoke and drum beats to transfer short information like prearranged signals. Then the semaphore became more common, firstly, it was used with flags or lights; a bit lately semaphore was developed to a line of stations with telescopes. But all these methods were limited by weather conditions.

The telegraph is a far cry from today’s communication systems but in comparison with its predecessors it was a big step further. Moreover, it was a groundwork for the technological revolution, but in those days people cannot imagine that. We owe a group of inventors with their leader Samuel Morse for the telegraph invention. Samuel Morse created a language and immortalized his name in it. Today we know it as the Morse alphabet or Morse code. This event has an idealistic meaning in history as well. It broadens men’s perception of the possibilities. 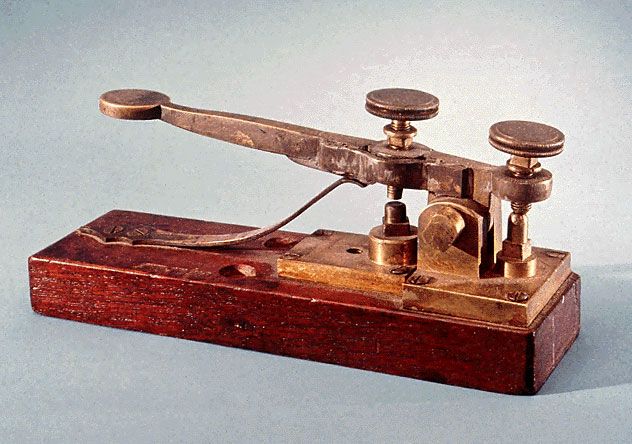 The next triumph comes with laying the first transatlantic telegraph cable. The idea belongs to American businessman Cyrus West Field who was supported by the British and American government. The cable was laid on the floor of the ocean and connected Valentina island in Ireland and the Bay of Bulls in Newfoundland. Since the cable was as long as never before, about 4,000 kilometres, and there was no way to correct inaccuracies automatically, it required about 16 hours to get a message. The cable was not perfect and after 732 messages it stopped working. 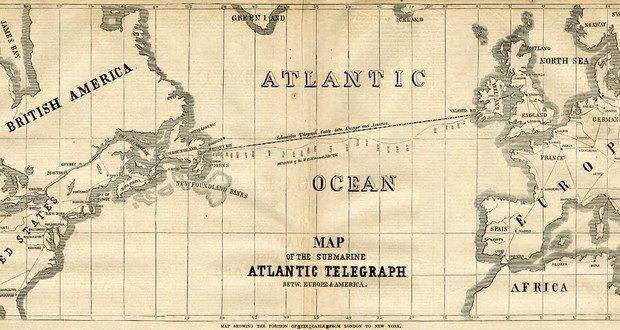 Telephone is an invention of Alexander Bell. He desired to create a distant communicator. He developed the idea of telegraph and learned how to convert sound signals to electrical signals. The idea of telephone networks was developed, and then followed by implementing computer networks. It has more practical applications in business, traditional paper-based workflow was partially discarded in favor of virtual transfering. But globalization came only with the Internet, the start of which is considered since the first contact between Stanford university and University of California in 1969. 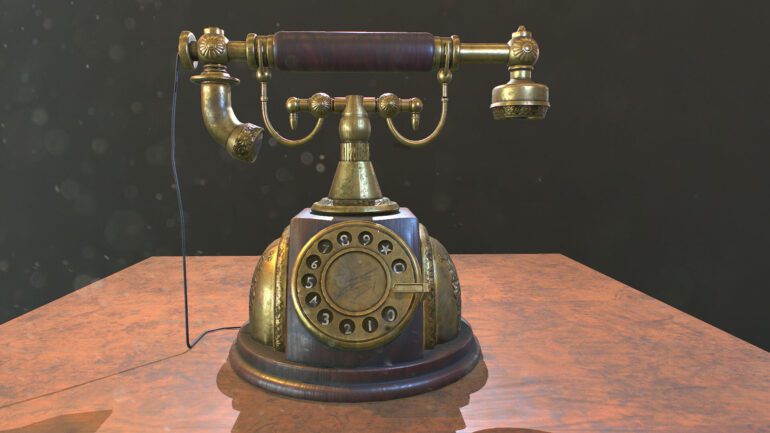 Every step was followed by a business boom. Telegraph, telephone, and the Internet economize expenses for delivering information. However, the purposes of usage were limited. Given that the inventions were not adapted for other aims except for information transferring, entrepreneurs cannot use it as a multifunctional tool, for marketing purposes, for instance.

All these technologies were used in business but eCommerce in 1979 looked so much different that you hardly could recognise it.

The idea of online shopping

It is rather a joke than a truth that online shopping was invented by a tired husband who was sick of shopping with his wife all day. That tired husband was English inventor, Michael Aldrich. He came up with the idea of so-called "teleshopping" in 1979. He suggested connecting TV and telephone lines so that people can order products from home. In 1980 Aldrich invented a "teleputer" special system which helps to make a purchase.

This scheme has become a prototype of eCommerce.

While people were ordering different stuff via TV, the Internet was gathering pace. The growth was extremely rapid. In fact, the first eCommerce company was Boston Computer Exchange which launched its platform in 1982. It was an online store of used computers. The concept of using a website as a marketplace comes naturally. It was a logically based step.

The successful pioneers in marketplace technology:

Marketplaces are getting more and more popular. The reasons for this are quite obvious: on marketplaces prices are lower than in brand stores since the competition is higher and a big assortment of products which attracts more consumers.

Switching to the marketplace is a decision that is beneficial not only for start-ups but also to stable businesses. Let’s look at the reasons in a real example. A landmark event has happened in august 2021. One of the biggest and oldest companies, Hudson’s Bay, which was founded in 17s century, is splitting to create two businesses, a department store and marketplace. 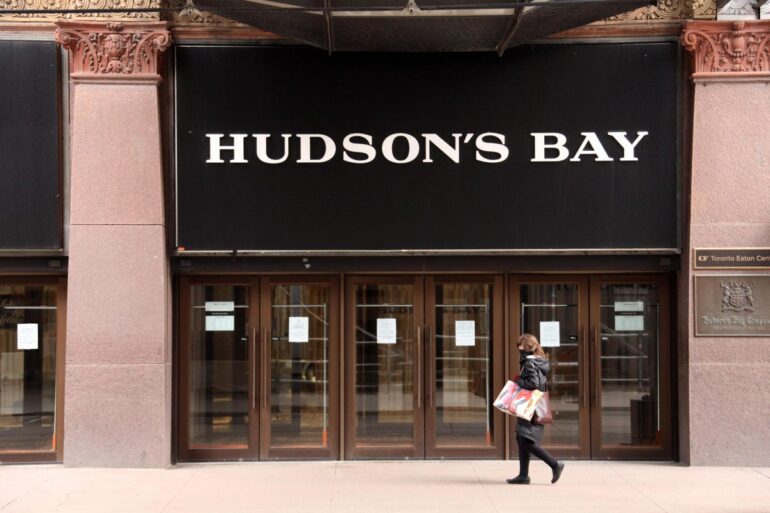 HBC claimed that this decision will positively influence digital shifting and contribute to sailings. A retail expert Bruce Winder regarded it as a way to get higher valuation and attract investors. The HBC strategy of switching got to admire. The leaders proceeded cautiously. They tested their marketplace in April 2021 when they added a lot of new brands to their website. It was a successful start which led to that decision.

The major steps to successful launching an online digital marketplace

For those who decided to launch marketplace from the ground up, we prepared some useful tips how to do in the most effective manner:

So, this was a brief look through the start steps. The technology of starting a marketplace is not difficult but every step should be considered well. 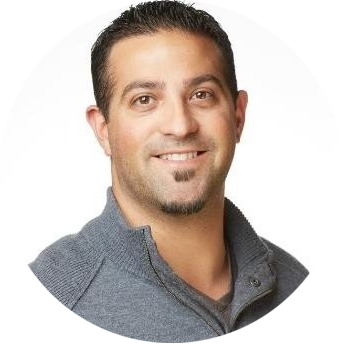 "The online marketplace industry will continue to thrive, but only those who invest in technology to keep updated with the current climate will be successful.

While many startups are starting their journey in the eCommerce industry, only those who can keep up with the technological demands that come with the increasing and rapidly changing consumer demands will continue to thrive. Given that many if not most people go online to shop and now prefer online shopping than in-person shopping, consumers' expectations have also skyrocketed. They want the most streamlined, up-to-date, and friendly websites, with easy checkouts, and virtual try-ons. Only companies who are willing to grow and adapt to this rapid change can also reap the benefits of sailing your products on online marketplaces.

Brick-and-mortar stores will continue to transition to online marketplaces.

Online marketplace technology is a result of many years of evolution. It seems that just recently we used smoke to pass information, but for the last two centuries we have made a great leap towards technological future.

We learn the plan of how to launch a marketplace platform successfully and explore the switching process in the example of the big company. It appears to be a very profitable deal. The expert confirmed that marketplaces are more than just quoted in the market; this industry is flourishing.

There is no doubt that marketplaces’ future looks clear and stable. More and more leading companies are choosing this business type. The possibilities are expanding and online shopping is as popular as never before.

Learn what Multi-Vendor is and
how it works in this 5-minute video:

Multi-Vendor is a platform for building an online marketplace. On a Multi-Vendor marketplace, you're the admin. You invite vendors, let them sell their products, and take commissions from them. In fact, with Multi-Vendor you get your own eBay.